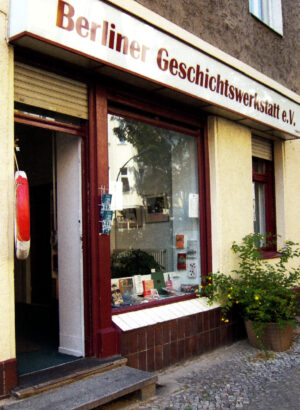 A project group of the non-profit association researched the long “forgotten” sites of forced labour and became involved in compensation and remembrance initiatives.  In 1995, the Berlin History Workshop began to systematically collect memories of former forced labourers. Oral history recordings, written memoirs and private photographs created a specialised archive on the everyday history of forced labour – all over Berlin. In interviews and letters, the witnesses tell of work, hunger, violence and bombs, but also of love and friendships.

With the smartphone, the memories of those involuntary Berliners are now coming alive again – on site on five tours across Berlin. The Geschichtswerkstatt is happy to receive donations so that further tours can be developed.